Manuel Fernández Carmona is a Postdoctoral Research Fellow at the School of Computer Science, University of Lincoln, UK.

He received the Diploma in telecommunication engineering from Málaga University, Spain, in 2007 and the Ph.D. degree (Dr.-Ing.) also in telecommunication engineering in 2014. In 2007, he joined Ingeniería de Sistemas Integrados Group at the ETSI Telecomunciación of Málaga University where he worked in the European Union IST project SHARE-it. From 2009 to 2011 he held a grant as a PhD. student in Ingeniería de Sistemas Integrados Group in the assistive robotics project SIAD. He has also collaborated in nationally funded projects (TAPRC, “Ciudad y Energía”) and regionally funded projects (SIAD,ALGARA). 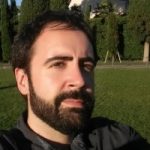 Manuel Fernández Carmona is currently in L-CAS, as researcher in the EU H2020 project ENRICHME, where he is focused on the research and development of the Ambient Intelligence Services combining domotics and AAL capabilities into a common ground with the robot Tiago.